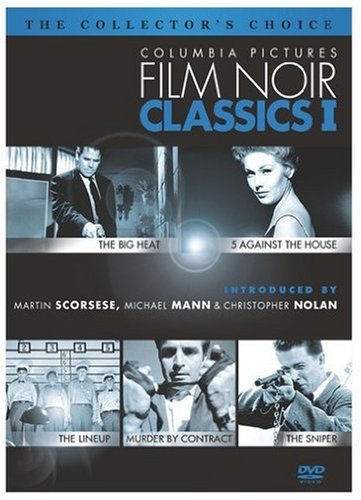 In the 1940s, a new genre - film noir - emerged from the world of "hard - boiled"pulp magazines, paperback thrillers and sensational crime movies. These films - tough and unsentimental - depicted a black-and-white universe at once brutal, erotic and morally ambiguous. Now, Sony Pictures and The Film Foundation have brought five noir classics together in one collection, all restored and remastered, and featuring brilliant performances by Glenn Ford, Lee Marvin, Kim Novak, Eli Wallach and Gloria Grahame, the genre-defining cinematography of Burnett Guffey, Hal Mohr and Lucien Ballard, and focused, taut direction by celebrated directors including Fritz Lang, Don Siegel and Phil Karlson.

Sony/Columbia comes late to the business of boxing classic noirs, but their first foray is a winner. The crisp restorations fairly pop off the screen, and although two titles tower above the other three, every one rates as a must-see. Fritz Lang is represented by perhaps his last great film, and there's a gem from Don Siegel with one of the grabbiest beginnings and most breathtaking action climaxes in thriller history. Phil Karlson, a busy man at Columbia in the '50s, contributes a caper movie set chiefly in Reno, and there's also a creepy, pioneering study of a serial killer, plus a truly offbeat specimen in which minimalist art film and bargain-basement crime movie converge as though the French New Wave were about to roll.

The Big Heat (1953) is second only to Scarlet Street as the most corrosive among Fritz Lang's films: honest cop Glenn Ford, in the process of fighting an entrenched Mob and deep-seated corruption, risks becoming a vengeful monster. The source was a novel by William P. McGivern, turned into a steel-trap script by Sydney Boehm. Still, it's director Lang's implacable vision, in terms of both camera and awesome moral symmetry, that makes this American crime story kin to Die Nibelungen. And yes, this is the movie with Lee Marvin as a mobster, Gloria Grahame as his sassy moll, and a legendary interaction involving scalding-hot coffee. As James Ellroy exults in his hilariously profane commentary, Don Siegel's The Lineup (1958) "grabs your gonads in the first five minutes"--actually, a whirlwind first minute-and-three-seconds involving the theft of something from a ship just docked in San Francisco harbor and two abrupt deaths. The pressure eases for a while as The Lineup fulfills its obligation to deliver, in effect, an episode of the police-procedural TV series of the same name. The real Siegel movie resumes as a team of hit men arrive in town to do a day's work. Eli Wallach, in his second big-screen role, is brilliant as Dancer the trigger man, described by his handler Julian (the excellent Robert Keith) as "a wonderfully pure pathological study, a psychopath with no inhibitions." One goose flesh-raising scene follows another until the action peaks at Sutro's museum-cum-skating gallery, a multitiered setting Siegel exploits for maximum tension. The end, right? No, just the launch pad for the finale, the most kinetic car chase the movies have ever done (Bullitt and The French Connection notwithstanding). Shooting on locations all over the City by the Bay, veteran cameraman Hal Mohr rises to every challenge, no sweat. Phil Karlson's 5 Against the House (1955) was the first screenwriting credit for Stirling Silliphant (who also worked on The Lineup), and the aggressively quippy dialogue gets on one's nerves. The premise is a good one, though. Four overage college students--two of them Korean War veterans--elect to spend their holiday break robbing Harold's casino in Reno. The idea is simply to "be first at something"; no one will get hurt and the money will be returned. Except that one member of the team has other plans: good old lovable but volatile Brick (Brian Keith), with that old head wound and a psycho-ward history only his buddy Al (Guy Madison) knows about. As was so often the case, Keith (son of The Lineup's Robert Keith) is the best thing in the movie… unless you hold out for the pre-stellar Kim Novak in frosty black-and-white. As Al's singer girlfriend, she completes the titular five--albeit at the expense of having to smooch with Guy Madison, who kisses like an angry robot. There's no kissing for The Sniper (1952), one of the strongest of independent producer Stanley Kramer's early efforts. A foreword explains that this is the "story of a man whose enemy was womankind," and the title character, a pleasant-looking but effectively anonymous nebbish (Arthur Franz), is soon expressing that enmity through his high-powered rifle. The script by Harry Brown lays on the hostile gender dynamics with a trowel, and a psychiatrist (Richard Kiley) files an indictment of society for having failed to provide proper treatment for the killer before it was too late ("It's our fault"). Director Edward Dmytryk makes dynamic use of steep, drop-away perspectives in San Francisco to suggest a world seriously out of joint.

Murder by Contract (1958) features another sort of murderer entirely, a young man named Claude (Vince Edwards) who makes a very good living as a killer for hire. Trained not to feel anything, and assured that a stranger killing a stranger is unlikely to get caught, he goes about his business dispassionately. He could almost be in a Robert Bresson film, moving through a world of Antonioni-like bleakness; deaths occur offscreen. The production resources don't even reach B-movie levels, and that's fine: a dime more might have jeopardized this picture's eerie spell. Irving Lerner directed, and Perry Botkin's electric-guitar score sounds like something that, a year or two later, would have adorned a film by Louis Malle. Only two films are accorded running commentary, well worth the listen in each case. Native San Franciscan and noir empire builder Eddie Muller provides the inside dope on The Sniper, then brings in hard-guy novelist James Ellroy to savor The Lineup; that one's a party. Directors who've patrolled neo-noir territory--Martin Scorsese, Michael Mann, and Christopher Nolan--supply intros. Scorsese's are the best, but as usual, there are spoilers galore and viewers are well advised to watch the movie, then the intro. --Richard T. Jameson

Numbeo is the world’s largest cost of living database. Numbeo is also a crowd-sourced global database of quality of life informations including housing indicators, perceived crime rates, and quality of healthcare, among many other statistics.
7,253,309 prices in 10,328 cities entered by 597,276 contributors
Recent prices added:

Numbeo provides a tool to see, share and compare information about cost of living worldwide, by providing online software which:

If you find something helpful or if you like the website, take a little time to help someone else, by contributing your local cost knowledge.

This page in other languages: