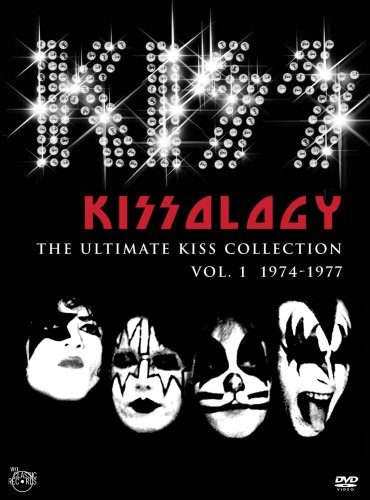 Monumental 6 Hour 2-DVD Box Set chronicles the ascension of KISS from New York glam rockers to Hottest Band In The Land. Never before seen footage of the band's rise to music stardom with more than 70 live performances and four full concerts. Disc One of Kissology Volume One 1974-1977 takes a look at early bar-band KISS quickly on the rise. 1974 is covered with a live concert in Long Beach as well as KISS' televised appearances on ABC's "In Concert" and an interview/performance on "The Mike Douglas Show." By 1975, KISS was playing San Francisco's fabled Winterland, headlining NBC's "Midnight Special" and making videos for "C'mon amp; Love Me" and "Rock And Roll All Night." In 1976, KISS came to Detroit for an incendiary concert at the Motor City's Cobo Hall, also captured on Disc One. Disc Two picks up the threads of 1976 with the bands interview and performance of "Black Diamond" on "So It Goes" a must-see and much-discussed interview and performance of "King Of The Nighttime World" on "The Paul Lynde Halloween Special," and personal band footage from May 1976. The 1977 material on Disc Two captures the band at the pinnacle of its international fame, performing to tens of thousands of fans at the legendary Budokan Hall in Tokyo in April '77 and, a little more than a month later, headlining "Don Kirshner's Rock Concert." Disc Two closes with scorching concert footage from The Summit in Houston, TX on September 2, 1977, showing KISS doing, quite simply, what the band still does better than anybody else: Rock amp; Roll all night and party every day!

As KISSology - Vol. 1 (1974-1977) announces loudly, all the chutzpah and bombast that made KISS so huge--the fire-breathing, the blood-dripping, the kabuki-mask make-up and platform shoes, the synchronized head-bobs--were in place from the very beginning. KISS's 1974 concert in San Francisco is virtually identical to their 1977 concerts in Japan and Houston, at the peak of their popularity. For hardcore fans, this opportunity to bask in the nuances of five performances of "Black Diamond" and six performances of "Firehouse" is essential viewing, but for the less committed the pleasures of KISSology lie in the bizarre collisions pop culture is heir to: Gene Simmons, in full costume, declaring himself "evil incarnate" on The Mike Douglas Show; Margaret Hamilton, done up in her Wizard of Oz Wicked Witch of the West garb, introducing KISS to the ever-cackling Paul Lynde on Lynde's 1976 Halloween special (the footage from this special doesn't include the tender ballad "Beth", undoubtedly due to the estrangement of drummer Peter Criss, who sang the band's highest charting U.S. single); and the truly surreal incident where KISS went to Cadillac, Michigan, and had breakfast with the entire city council wearing full KISS makeup before the band made a spectacular exit by helicopter. Rock amp; roll is full of strange phenomena, but KISS is one of the most inexplicable: An adolescent fever dream of superheroic hedonism that somehow achieved world-wide stardom and kept its career alive for over 30 years. KISS started as a deliberate cartoon, became a bad joke, and have re-emerged as a fond memory, still cranking out pyrotechnic spectacle. Three volumes of KISSology is probably excessive, but why stop the excess now? --Bret Fetzer

Top Categories Of The Month

Christmas Gifts Save Up To Half Price

Experience the Fast and Secure shopping with our App.